Tourist coast for the whole year

Read the Costa Blanca in a nutshell to see what you can see, do and experience. 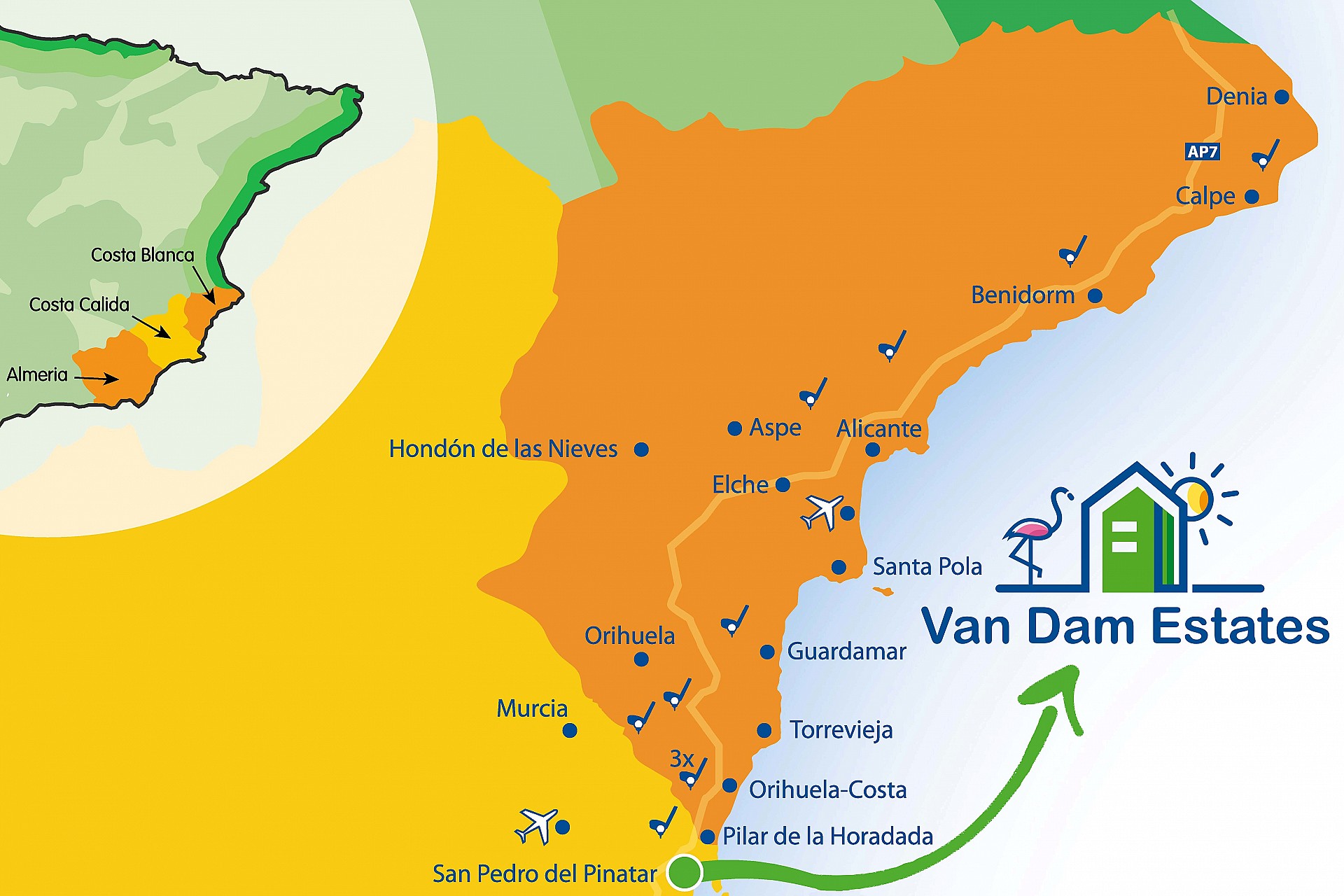 The Costa Blanca (White Coast) has long been one of the most popular holiday destinations in all of Europe. From Denia north of Benidorm to Pilar de la Horadada, this stretch of coast winds its way for 200 kilometers south. With many kilometers of uninterrupted sandy beaches, interspersed with small bays sandwiched between rock formations, it guarantees great beach fun. This coastal strip on the Mediterranean is also blessed with a beautiful climate. Warm, dry summers with little rain and mild winters are a winning combination. The presence of many salt lakes at Santa Pola, Torrevieja and on the border with the Costa Cálida give an extra injection of health to the climate.

The beaches on the Costa Blanca have much more to offer than sunbathing and swimming in the sea. The arsenal of water sports activities expands every year. Lovers of diving, snorkeling, surfing, jet skiing, paddle boarding, banana boat trips and windsurfing can indulge themselves at various locations. Santa Pola, just south of Alicante, has made a name for itself as a paradise for windsurfing, kite flying and kite surfing in particular. The conditions for these sports are more or less ideal there. 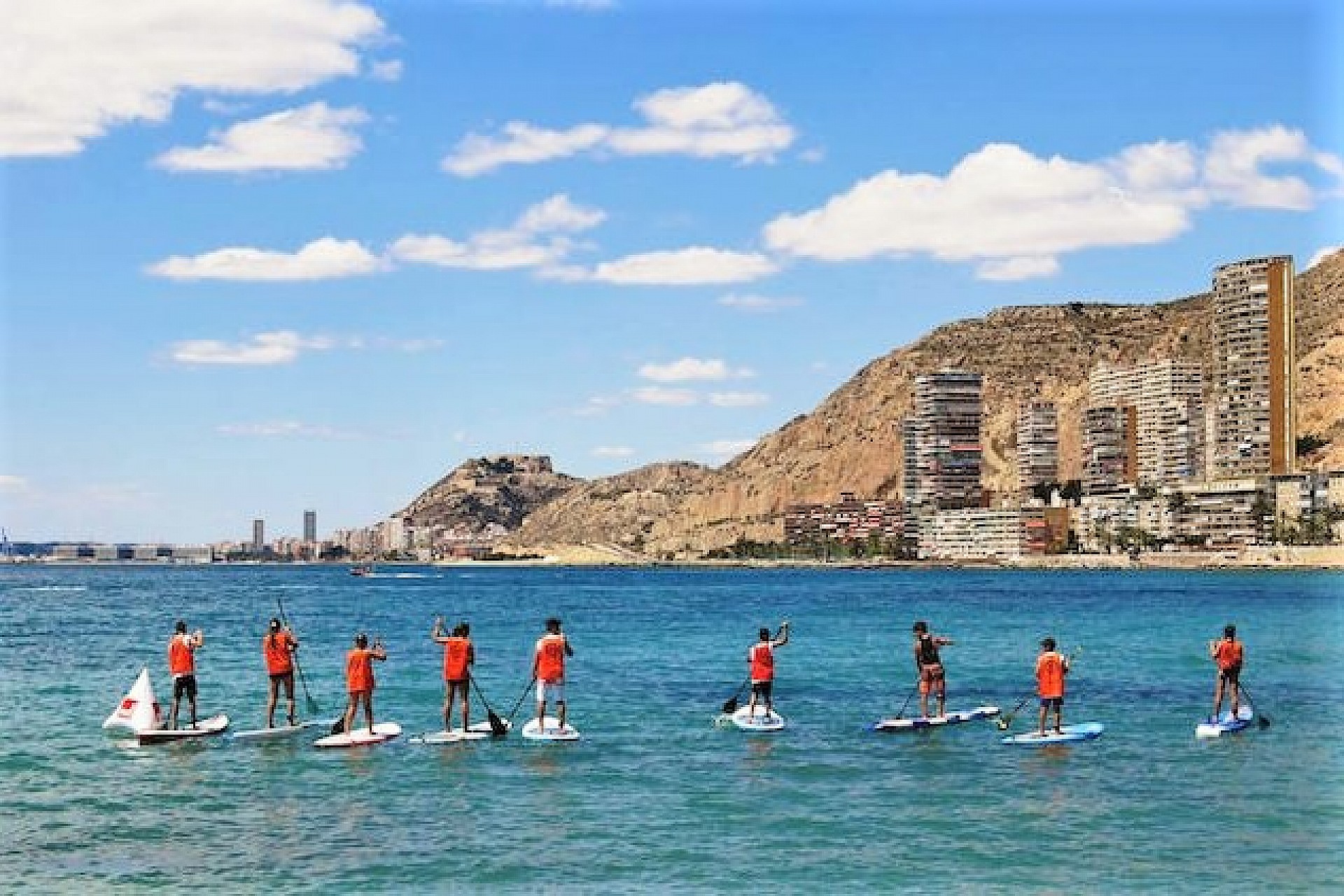 Sports can be practiced a few steps from the beaches at one of the many golf courses. The Orihuela Costa, south of Torrevieja, offers four golf courses at a distance of a few kilometers from each other.

A life for Spaniards without a fiestas is hard to imagine. Almost all villages, towns and cities celebrate annually in honor of their local patron saints. Often spread out over many days, colorful parades and processions are held. The same thing happens everywhere during Easter week. Typical of the region are the processions of the Moors and Christians. These celebrate the victory of the Christians over the Moorish rulers centuries ago. With the most creative and sometimes bizarre outfits from that time and the music of local orchestras, these parties are a pleasure for the ears and eyes. The season for these parties starts in April and ends in September. In the meantime, dozens of locations will be visited.

The Costa Blanca also has a lot to offer inland. A popular destination is Guadalest. With about two million visitors a year, this small mountain village (about 250 inhabitants) is a chain of sights. Only the location of Guadalest is very special. Hidden behind and on a mountain, it can only be reached via a tunnel. The main trump card is the castle, but also the beautiful village square, the beautiful town hall, the reservoir and many museums underline why Guadalest attracts so many tourists. 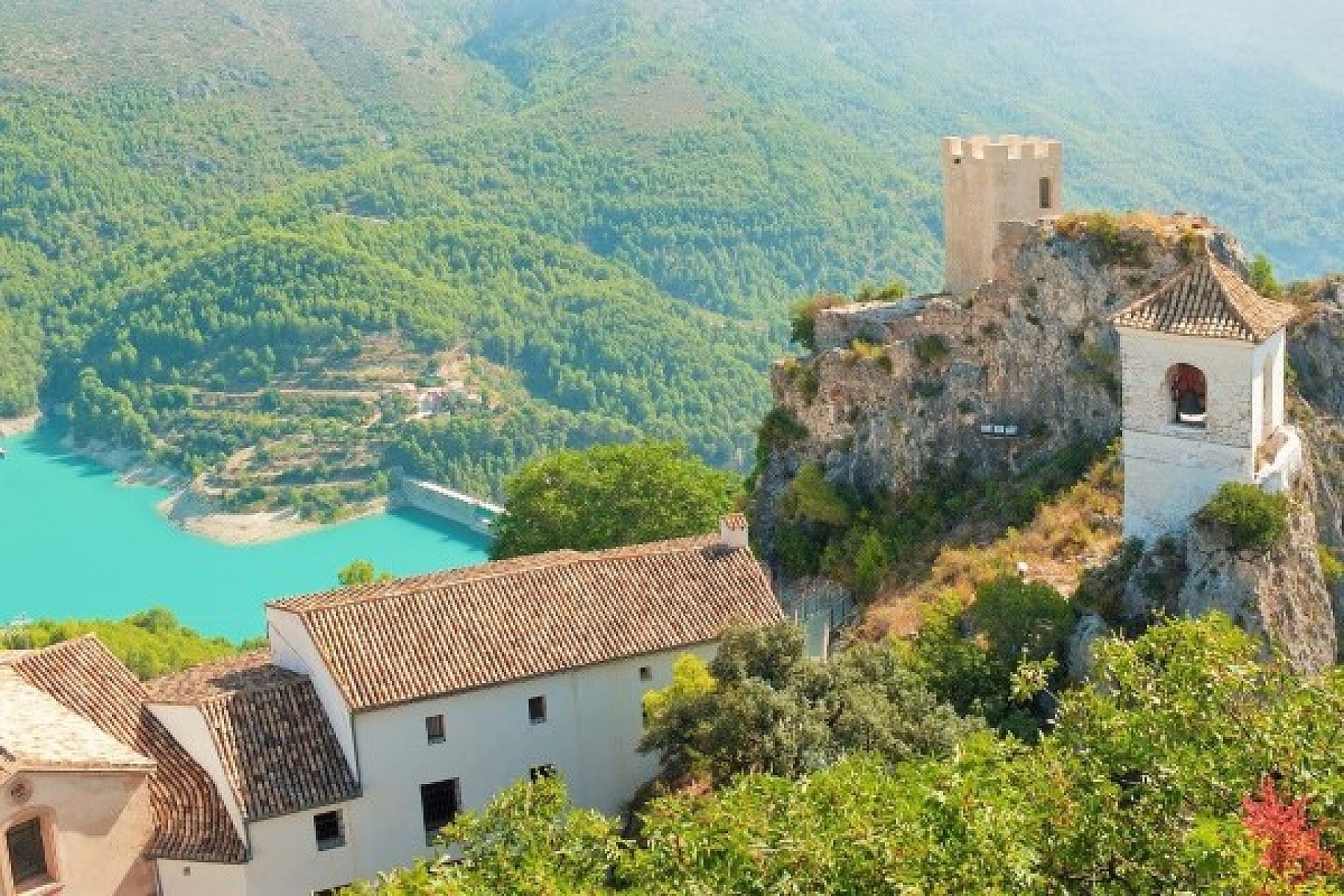 The hinterland also has a wide choice of picturesque villages with narrow cobbled streets. There it sometimes seems as if life is frozen in the days of yore. Sometimes this is also the case, because old traditions are still fully honored here. For cycling enthusiasts, a trip around the Embalse de la Pedrera is highly recommended. This turquoise colored reservoir is surrounded by beautiful nature. If you want to experience the varied hinterland in a completely different way, balloon flights from Elche are a popular option. 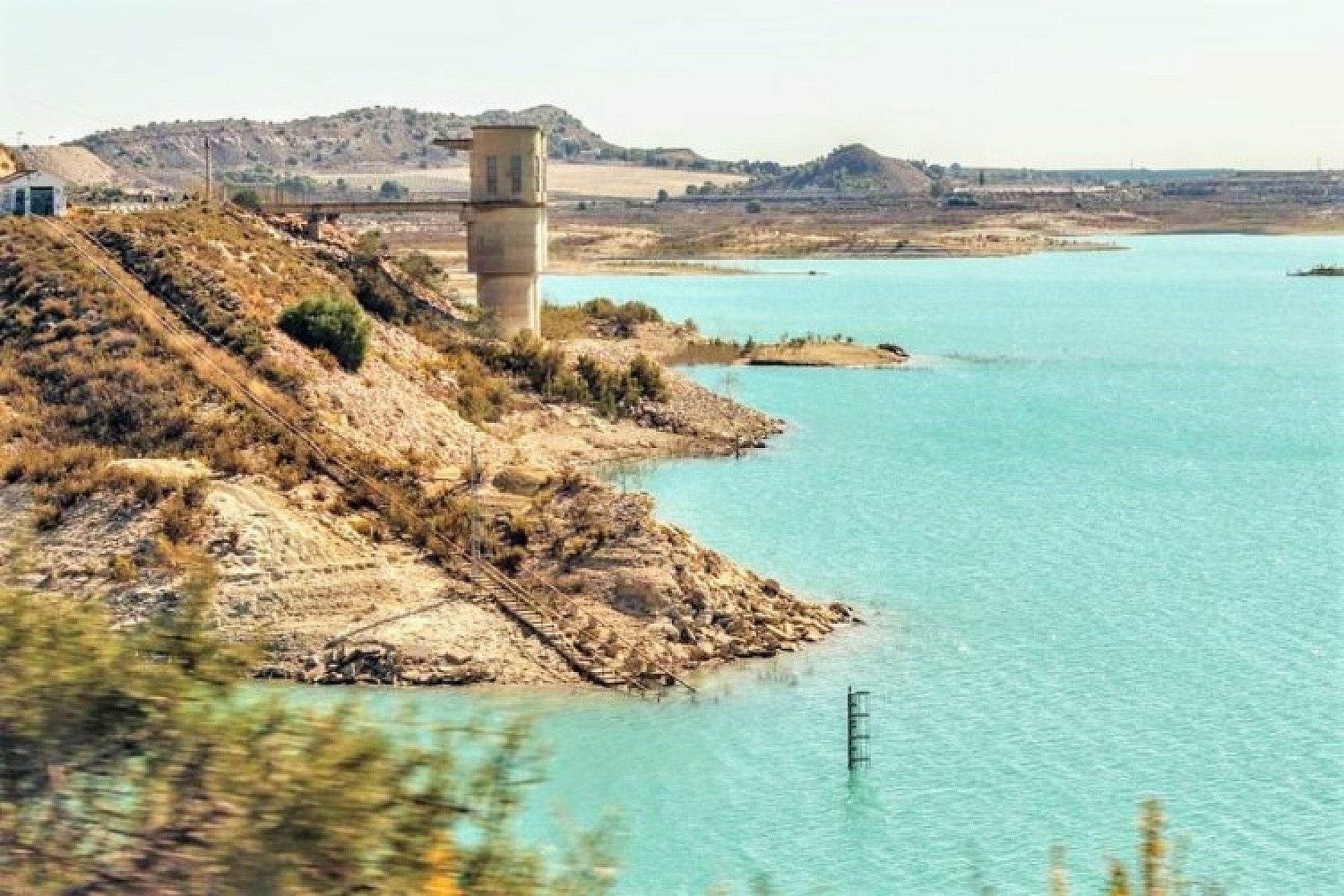 What was once a sleepy fishing village is now the main tourist resort south of Alicante. Torrevieja cannot boast of the historical importance that cities such as Elche and Orihuela have unmistakably. But that is more than offset by the family-friendly vision of the city council. In the transformation of a fishing community into a dazzling tourist destination, a philosophy has been clearly chosen for everyone. Two water parks are an important attraction for the youngest visitors. Teenagers have a wide choice of different nightclubs and can indulge themselves during the day with a range of different water sports activities. 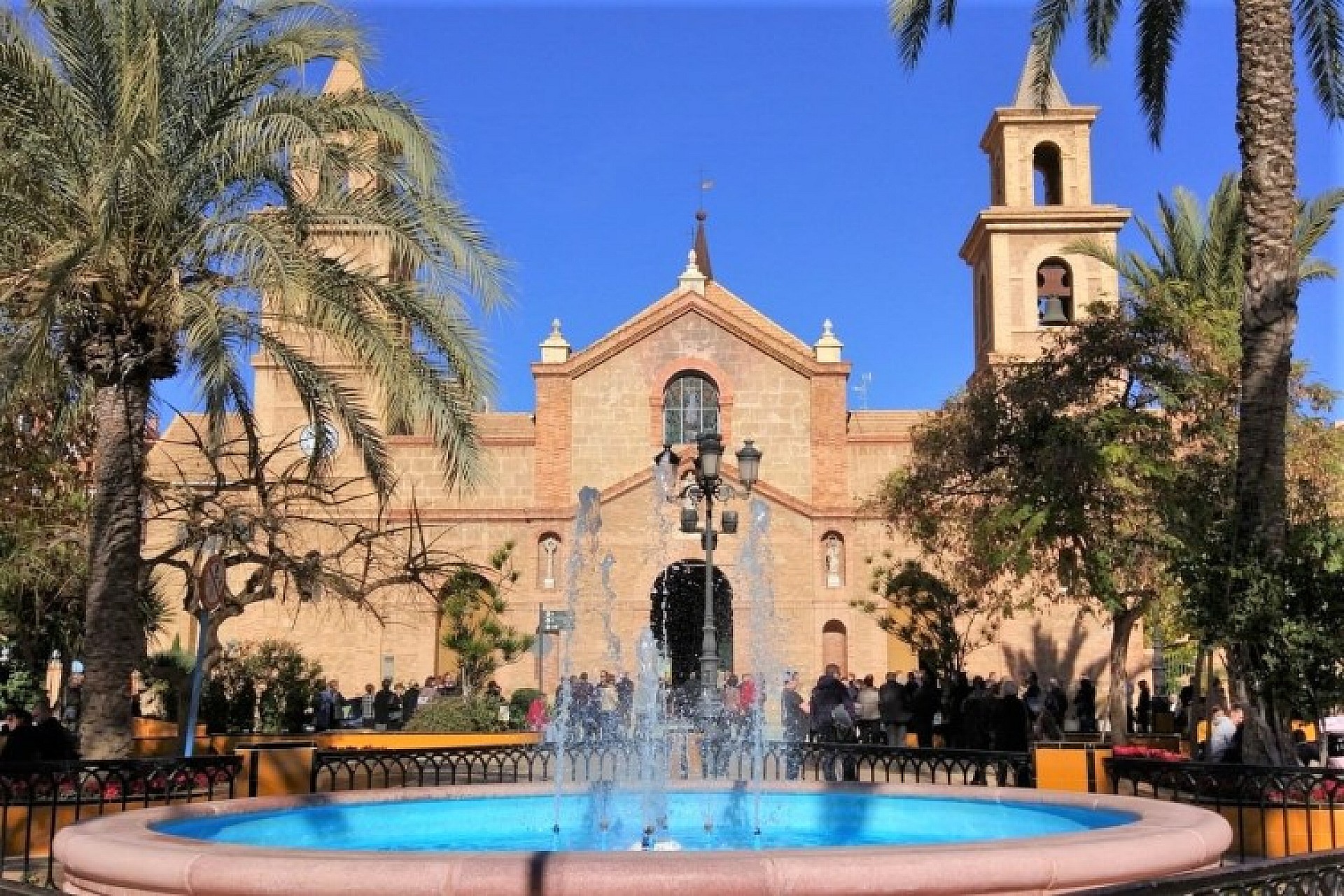 Yet the past has not been completely brushed away. The interesting museum dedicated to the important salt production and the many fiestas and festivals attest to this. Besides the usual fiestas (carnival, Easter procession, Moors and Christians), Torrevieja is also known for the May fiestas that are celebrated in Sevillian atmosphere. There are no fewer than three festivals dedicated to local patron saints: one for the whole of Torrevieja (Virgin Rocio), one for the La Mata district (Virgin Rosario) and one especially for fishermen (Virgin Carmen).

The city has two trump cards in the field of music. The Habaneras music and choir festival is already 66 years old and has since grown into a festival of international allure. Held in July, it now attracts solo artists, small ensembles and especially many choirs from all continents. Torrevieja is also internationally recognized when it comes to pop music. Big stars like Shakira, Duran Duran and R.E.M. have now performed there.

The town of Orihuela is a bit of a strange phenomenon. It covers two areas, which are about 20 kilometers apart. The difference between the town and the coastline, the Orihuela Costa, is a difference of night and day, of old and new. Where the history on the coast dates back several decades, the first reports about the town date back to the fifth century. Once, in 825, Orihuela was even the capital of the kingdom of Tudmir. The city was therefore influential enough in the past to successfully claim a strip on the Mediterranean Sea as territory.

It will therefore come as no surprise that the current town exudes a rich history.

A walk through the medieval center feels like you are being thrown back in time with many narrow, winding streets and old buildings that seem to call out 'look at me'. There is indeed a lot to see, such as the cathedral, the Santa Justa y Rufina church, the Rubalcalva palace and the Baroque Santo Domingo church. It is not without reason that the center has been officially declared a 'historical, artistic and monumenal area'.

The city of Elche, with over 230,000 inhabitants, can be summed up in two words: palms and shoes. At the same time, that doesn't do Elche enough, because it has much more to offer. But when it comes to palms and shoes, Elche holds the record on both fronts. The palm grove is by far the largest in the entire continent. With an estimated 200,000 palms (mainly date palms) it has earned a place on UNESCO's World Heritage list. While the date palms used to have a primarily agricultural function, today they are used for the production of white palms. These are used in Palm Sunday processions and exported all over the world. 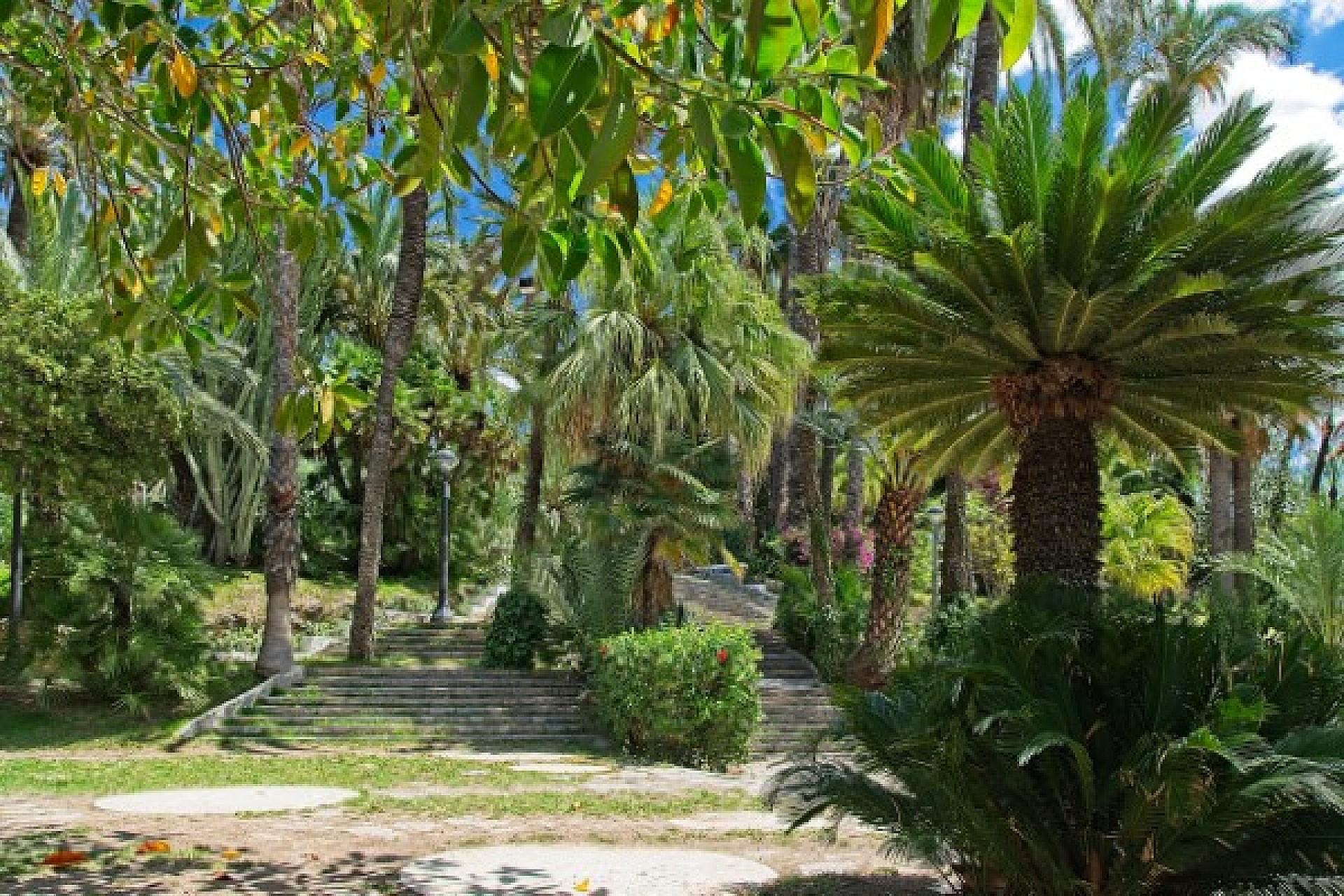 The shoe industry is an important source of income. With around 1,000 factories and factories, it is the largest footwear producer in Europe and also houses the continent's largest factory.

UNESCO has also placed the so-called Mystery Play of Elche on its list of important heritage. This spectacular medieval drama is staged every August and attracts visitors from very wide surroundings. Also in August the feasts of the Moors and Christians are held. Elche is clearly a draw for those with an interest in history. Frequently visited include the basilica Santa Maria, the Altamira castle and the underground Arab baths.

Read the Costa Blanca in a nutshell to see what you can see, do and experience.