Pilgrimage of San Blas in Santiago 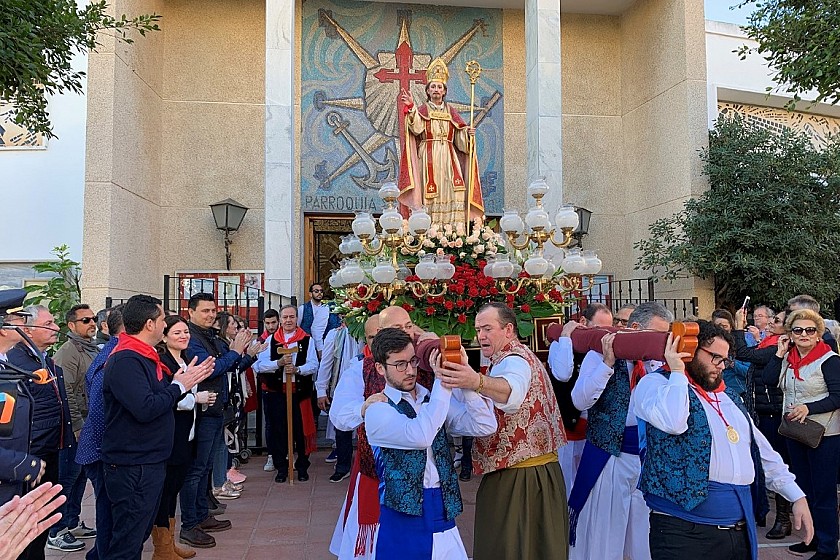 Of the pilgrimages (Romerías) that take place annually in the municipalities along the Mar Menor, that of San Blas in Santiago de la Ribera is the only one that is entirely held on land. Other Romerías in the region always have an element of the sea in their program. The tribute to this saint is always on the calendar for February 3. As is so often the case with festivals dedicated to local saints, the start of the activities is rather subdued and sometimes a bit pious. Later in the day for the local population the release follows with casual fun and entertainment.

The figure of San Blas is revered because he settled in Santiago de la Ribera around 1600 with other members of the Trinatarians monk order. The order's main goal is to help people who are persecuted for their Christian faith. That was when Muslim rule in the region had come to an end.

The festivities begin at ten in the morning with a procession where a life-size image of the saint on a wooden throne decorated with flowers is carried by Santiago. The traditional country dress of the processiongoers and a hedge of riders on horses give the whole a serene feeling. Yet the strong sense of community of the Romería and its religious character is regularly interrupted by exuberant music.

The pilgrimage ends at the San Blas church where a medieval-style mass is performed. That means that a lot is sung to the tones of folk music. The local Santiago Apostol choir always performs during this service. Anyone who wants to secure a place in the church would do well to be present early, because the church is always bulging.

After the service, all brakes are released in the various camps that have been set up in Santiago. Everyone then surrenders to dance, music, drinks and the paella made available free of charge by the municipality.

A special element of this Romería are the small gold-colored terracotta figures of San Blas that are for sale everywhere. Hanging from ribbons or choirs, the mini San Blas figurines are intended to hang above the bed of children. Tradition has it that this protects the young from laryngitis. People who want to look at the life-size image of San Blas in peace can visit the church named after him, where he 'rests' from the pilgrimage for the rest of the year.